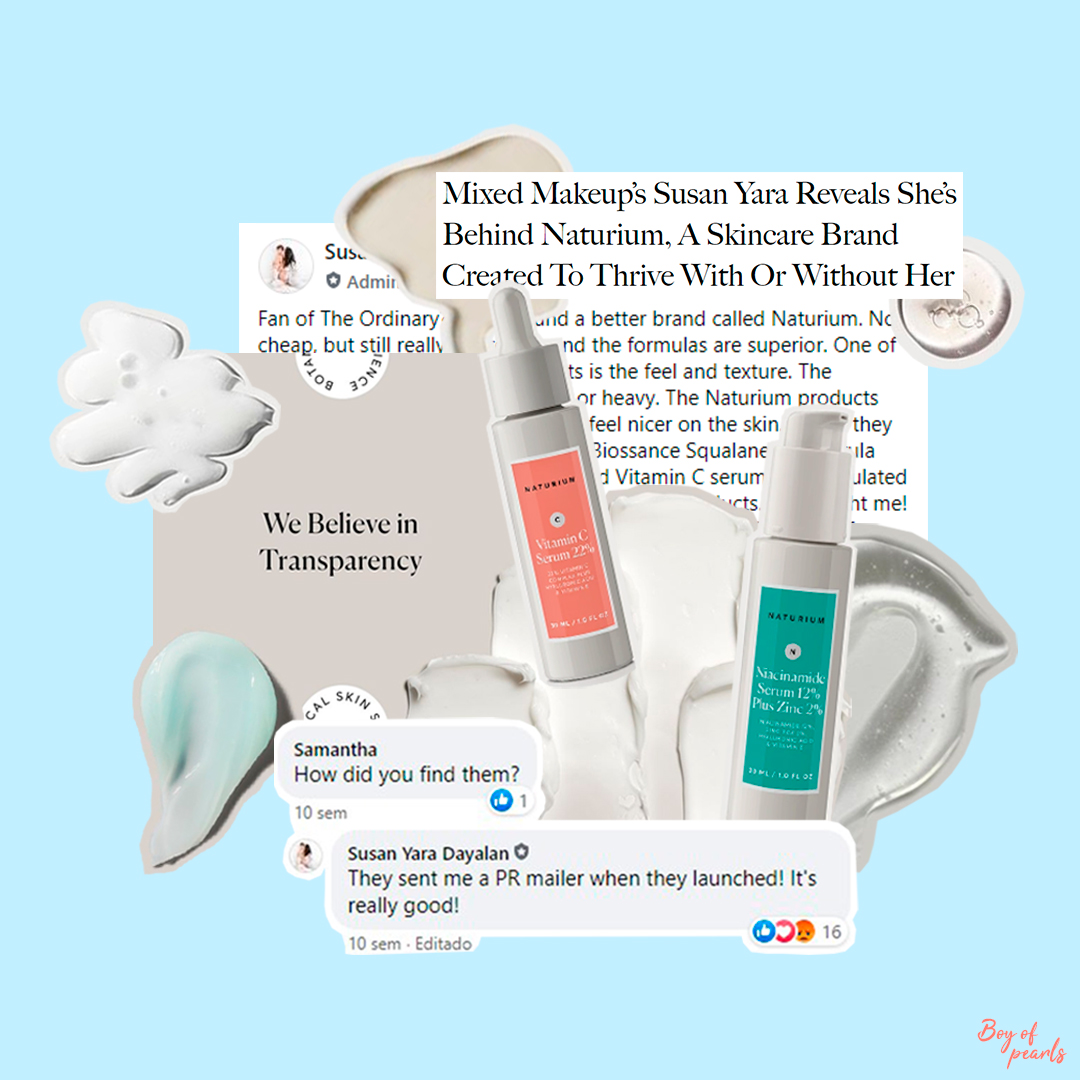 What would happen if someone with a bigger platform promoted products without disclosing their affiliation with the brand? Wouldn’t that be dishonest and untransparent? Well that’s exactly what happened with Susan Yara’s Naturium, but first… let’s get some context.

Susan Yara is a periodist who’s better known for creating Mixed Makeup, a digital media production company that focuses on beauty and, according to their about page, a “… women’s content that bridges the gap between influencer blogs and traditional media publications.” I personally learned about her through her Skincare Reactions! series on Mixed Makeup’s YouTube channel and I like her approach to skincare, since overall it isn’t really product oriented, it is more oriented towards ingredients and product performance and ways of use.

Now let’s talk about Naturium, that according to them, offers “Clinically-effective, potent & clean skincare formulas that work”. It was launched on February 2020 and its origin was unknown until June 21st when Yara posted this video, in which she informed that she’s the co-founder of it. She also shares that she decided to not disclose it earlier because she wanted her products to speak for themselves and her brand to not be catalogued as another influencer brand.

At first glance I didn’t thought anything negative about her decision, I think that sometimes influencer brands can loose it’s credibility in the eyes of the general public, and also, since she’s a well respected figure in the skincare community, maybe other’s reviews would be seen as dishonest or biased. But it wasn’t until I started reading the backlash she was getting that I realized why people were upset and why, even though she didn’t mean any harm, her practices were still dishonest an untransparent.

A key element to the development of the story is that Mixed Makeup has a Facebook group called Beauty Questions Answered by MIXED MAKEUP, where people could go and share their experience with skincare, creating knowledge with the help of the community. This group has been archived since June 26th, which means that no one can actively participate in it, but I still have access to it and can look through its content since I used to be and still are a member.

As I stated earlier, Naturium launched on February of this year, but it was until April 15th, that Yara posted on the group that she found a brand better than The Ordinary and in the comment section, when asked about how she found it, she answered that she got a PR mailer:

And on April 19th she faked getting a discount code and gave more information about the brand’s plans to ship internationally:

But her promotion on the brand didn’t stay only on the Facebook group, on April 28th she published a video titled 4 Affordable Vitamin C Serums I Recommend, where she features the Naturium’s Vitamin C Serum 22%. In the 7:33 mark, she mentions that she’s curious about using the other vitamin C serum this brands offers as a nightime option, pretending that she hasn’t tried Naturium’s Vitamin C Super Serum Plus and that she doesn’t even know its name.

And last but not least, on April 29th on the Get Rid of Clogged Pores With This Skincare Routine! video, she featured Naturium’s Niacinamide Serum 12% Plus Zinc 2% refering to Naturium as a brand that she likes and on the on the 15:13 mark, as a “newer brand that she’s been using”, avoiding anything about her affiliation with it as a co-founder. Other moderators of the FB group shared their experience with the brand and their products later on, but as far as I know, they didn’t have any knowledge of Yara’s involvement, so I won’t be focusing on that.

Now that I have stated the context and proof of what went down, let’s start with the analysis: first of all, on the legal aspect, she basically ignored a key point on the Federal Trade Commission’s guide, Disclosures 101 for Social Media Influencers, where they state that anyone that endorses a product through social media, should inform when they have a relationship with the brand, wether it is personal, family, employment or financial, which means that agter this incident, Yara could get investigated and fined by the FTC for dishonest practices, if someone presents a complaint.

On the ethical side, I believe that what she did was unethical. I understand why she did it and that she meant no harm, but there were better ways to let her products speak for themselves that wouldn’t seem dishonest and unreliable. She could’ve sent PR packages and maybe post it on the FB group without lying about how she heard about it, she could’ve said a friend was developing it and she helped in the process, that even though it still would be lie, it would be one that makes the viewers understand that she has a more direct relationship with the brand that she’s promoting.

I think that this wasn’t a well thoughtout thing, I feel like she just decided to not share her involvement and the beginning without an actual plan of how this will develop, then she covered up with lies and minimized her knowledge and involvement with the brand as things went on, expecting everyone to be supportive when she decided to inform her role as co-founder, even though she pretended not trying and not knowing the name of her products.

I believe that the FTC states the importance of disclosing any type of relationship because by being transparent on how do you, as an influencer, relate to the brand or the product you’re promoting, or even how did it got to your hands, you will be giving the viewer enough information to make a conscious decision. I do think that when you’re getting monetary gain or someone you now is involved in what you’re promoting, it is more likely that you give a biased opinion, not because the product isn’t great, but because you or someone close will be benefiting from that positive opinion since you’re doing an advertisement.

Susan Yara’s opinion has been respected in the online skincare community and she always, to an extent, mentioned and made clear if a product was purchased by herself or if she has gotten it directly from the brand through PR, giving a sense of transparency that was broken by her actions. I believe that she has lost a lot of the trust she has gained from her viewers over the years, from now at least I will be doubtful of her recomendations, wondering if she’s not being honest about her affiliations, and when she introduces a newer brand, I’ll wonder if she’s also behind it.

This situation highlights the big lack of honesty and tranparency that still exists with influencers/content creators. In Mexico there isn’t any law that obligates influencers, bloggers and content creators to disclose at least when they’re getting payed by a brand to promote something. Even though Susan’s and Narturium’s case might not be such a big of a deal, since she wasn’t promoting something harmful without trying it herself, it still is dishonest, unethical and not transparent to promote a brand you have founded without letting your followers know.

I’m not doing this as an attack on her or on her brand, I’m actually really curious about their formulas since, as I stated earlier, I am a frequent viewer of Mixed Makeup’s videos and I believe Naturium is bringing something interesting to the table as a skincare company, but this whole debacle just leaves a bad taste in my mouth and leaves me wondering, what other influencers are not being honest and transparent about their affiliations with brands? Is anyone else the creator of a brand they keep promoting and pushing to their followers without them knowing?

Here at Boy Of Pearls, transparency will always be key and I feel it is important to inform about this situations so we can know about the lack of tranpsarency that still exists so we always take people’s recommendations on products and services with a grain of salt.

View all posts by Salvador Cabello